Here are the new Down Payment Rules that will come into affect February 15th, 2016. Sounds like a big change, however, take a closer look at the chart below and you’ll see there is not that much difference for those purchasing a home between $500,000 – $999,000.

Most people purchasing a home in this price range should be able to come up with the extra funds to make it work.

The majority of First Time Home Buyers will be unaffected as these purchases tend to be under $500,000.

by Bill Curry and Tamsin Mcmahon, The Globe and Mail with a file from BNN staff.

The Liberal government is raising the minimum down payment for new insured mortgages to 10 per cent from 5 per cent for the portion of house prices above $500,000.

Finance Minister Bill Morneau, who announced the change in Ottawa Friday, said the new rules will take effect on Feb. 15, 2016. Down payment rules for mortgages for properties below $500,000 will be unchanged.

Mr. Morneau said the rule change is intended to target high-priced properties and should have less of an impact on first-time home buyers.

The move is aimed at cooling overheated housing markets in Toronto and Vancouver but that could risk exaggerating a home price correction in the Prairies.

Ottawa had previously restricted its mortgage insurance to homes valued at less than $1-million, so the minimum down payment for more expensive homes remains unchanged at 20 per cent.

Just 17 per cent of home sales across Canada over the past year were for between $500,000 and $1-million, although that figure rose to 33 per cent in Vancouver and 40 per cent in Toronto.While the move represents the most significant tightening of mortgage rules since Ottawa implemented the minimum 5 per cent down payment in 2008, the effect may be smaller than expected, writes Mr. Tal.

Roughly 23 per cent of outstanding mortgages in Canada are considered “high-ratio,” with owners requiring government-backed mortgage insurance, meaning the rules will affect less than 4 per cent of new mortgages, writes Mr. Tal.

A source told BNN the previous government considered making this kind of change to mortgage rules but “knew it wouldn’t impact very many people directly, [and] would have likely had a broader psychological impact.”

The share of properties valued at between $500,000 and $1-million is actually smaller in Toronto and Vancouver than given that sizzling markets have pushed many properties, particularly detached homes, over the $1-million mark.

Sizzling markets have pushed the prices of many homes, particularly detached houses, above the $1-million mark in Toronto and Vancouver, pushing out many of the first-time buyers who would most likely be affected by the new rules. A survey earlier this year by private sector mortgage insurer Genworth MI Financial found the average down payment among first-time buyers in Toronto and Vancouver was 20 per cent.

The new rules will likely affect just 5 per cent of new sales in Toronto, and just 2.5 per cent in Vancouver, writes Mr. Tal. But will affect nearly 10 per cent of sales in Calgary, where homeowners tended to have relatively small down payments.

“The overall impact will be felt only at the margin, given the relatively small segment of the market that will be impacted – even in the target markets.”

Even so, the government’s move has widespread support, according to a RE/MAX survey released earlier this week that found two thirds of Canadians agree that the minimum down payment for a home should be at least 10 per cent.

Canada Mortgage and Housing Corporation also announced it was raising the limits on its government-insured mortgage-backed securities program to $105-billion in 2016 from $80-billion this year. The program is an important source for lenders, allowing them securitizes insured mortgages and sell them to investors, with Ottawa providing insurance on both the mortgages and the mortgage-backed securities themselves. The amount of government-backed securities that individual lenders can issue each year was raised from $6-billion to $7.5-billion. CMHC said it was hiking the fees it charges to lenders who go over the prescribed annual allotment, but would lower the fees for lenders who used the government’s Canada Mortgage Bond program.

“…the impact on housing activity is likely to be relatively modest and short-lived.”

“Ottawa’s changes to down payment rules should have a minimal impact on home sales and prices, and are a less aggressive move than those brought in back in 2012.”

“…for the market as a whole the new measures will impact an estimated 3.9% of mortgage originations.” 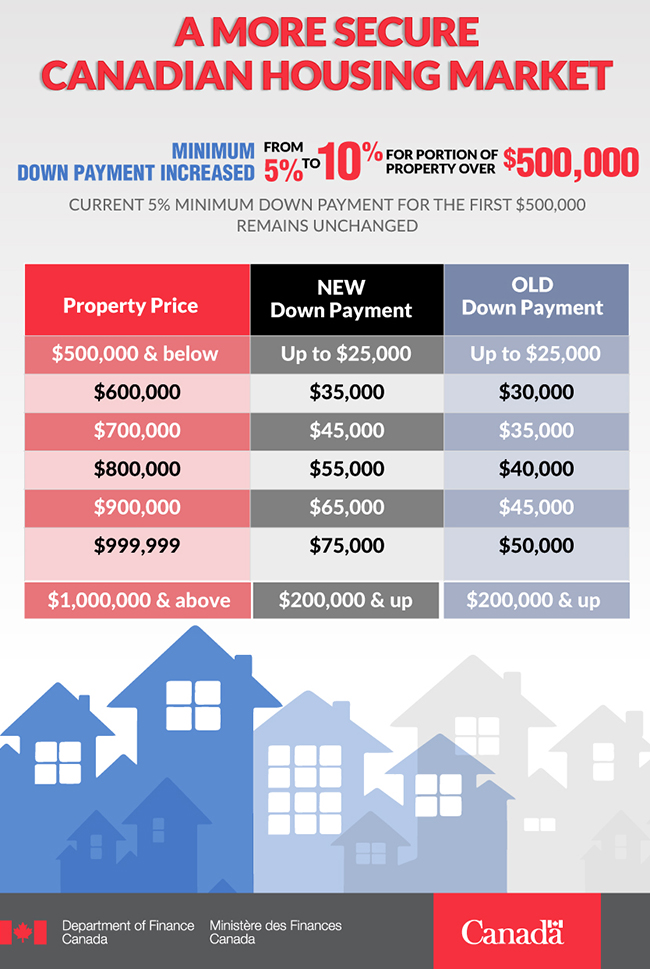